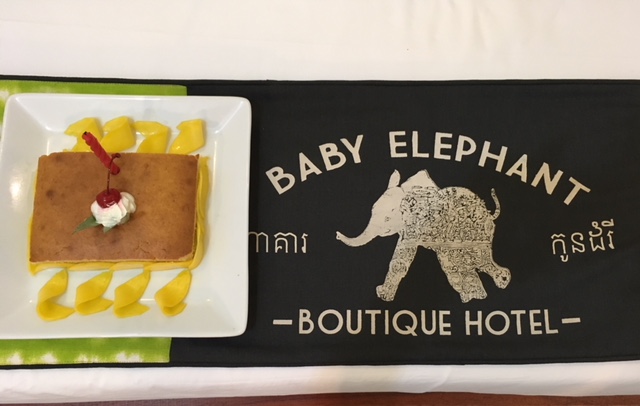 Checking out of the Coznya Hotel in Phnom Penh at dawn on December 22, I did my best to haggle, as advised, with the tuk-tuk driver waiting out front. He wanted $3. to take me to the main Post Office where I had booked a ticket in the Cambodian Post VIP van for the five hour ride to Siem Reap. I told the driver that the hotel guy had said it should cost $1.  This sweet faced man asked, “Would you consider paying me $2?” I would. Zumba lessons had already started on the promenade by the river led by a burly fellow in a blue and white Nike track suit, music blaring from the ghetto blaster on the seat of his tuk-tuk. The sky over the Tonle Sap river was streaked with pink and blue. Another perfect day was dawning in Cambodia.

My driver knew just where to take me to catch the  Post van and carried my bag to a row of chairs where I could wait. I was the first traveler there. Behind me was a soft plastic dome-like structure that started to move as I looked at it. A young man climbed out from underneath this tent-of-sorts and dismantled it, revealing a cot, a pillow and a small dresser. He folded up the tent, put it in the dresser, folded the cot and placed it next to the dresser, smiled at me, and got to work moving orange cones in the parking lot.

The Post vans are just that: owned by the post office, they are used to carry mail from one town or city to the next. Being an enterprising lot the Cambodians decided to make some money by carrying passengers along with the mail. This is a realtively new thing (my hotel had not heard of it) that I learned about in an interesting blog called: Moving To Cambodia. Other passengers straggled in and I struck up a conversation with an entertaining chap from Australia who lives in Austria and comes south for his vacation every Christmas. “People up there just don’t understand,” he said. “They think I should go to Spain or Greece. There’s nothing there!! I love it here…. the smells, the food, the people… it’s like nowhere else.” He pointed out a troop of monkeys climbing on the ganglion of wires festooned around a nearby building. “Look at that! You won’t see that in Spain.” He spat out the word Spain, making me laugh. We hung out for the duration of the trip and waved goodbye outside the post office in Siem Reap.

The van was new and comfortable and came with wifi, AC, free  bottled water and a very competent driver who got us to our destination a half hour early.

The Baby Elephant Boutique Hotel sent a driver to pick me up and he drove me at a boob bouncing pace through the dusty red alleys that led to the hotel. Depositing my bag at the front desk he proclaimed his fervent willingness to transport me anytime, anyplace during my stay.

A young man at the front desk welcomed me, brought me an ice-cold wash cloth for my sweaty face and a champagne glass of a cold, fruity tea. Then he spoke at length, telling me all about the hotel and what it had to offer. Unfortunately I could only understand a bit of what he said (I’m still not used to the accent and my hearing isn’t good) but I got the gist and nodded and smiled. The owner, Ilana, came over, welcomed me warmly and handed me a card, saying how happy they were that I had chosen to spend my birthday with them! The card, she told me, came with a gift certificate from my family, for me to use on any hotel services. Since the Baby Elephant has a spa and a restaurant, these services are considerable. I was completely blown away by this gift! I hadn’t left an itinerary and thought nobody knew where I was.  I had thought to spend the 24th stoically on the down-low – reading and resting, swimming in the pool, visiting AngkorWat, exploring the the town and completely ignoring my 75th birthday.  Now I was going to be forced to include some celebratory  luxuries into my plan. Oh well. I’ll make the best of it.

In my room I had the AC cranked and was about to jump into the shower when I heard a gentle knock at the door. Hastily re-dressing, I opened the door to find 7 or 8  of the young hotel employees standing in the hall holding out a birthday cake decorated with mango slices, whipped cream , a neon red cherry and a large, lit candle. They sang a rousing rendition of Happy Birthday, their pretty faces shining with pleasure. I beamed back at them, moved and pleased and not about to tell anyone that my birthday is still two days away.

After they left, I tried a bite of the 8 x 8 inch cake and realized that, aside from the mango it was too dense and dry to be edible. I ate all of the mango slices and the whipped cream. Then, because I didn’t want to hurt these sweet children’s feelings by sending it back uneaten, I cut off a large piece of the bready cake and put it in the toilet, thinking it would surely disintegrate and I could flush it away. Wrong. The cake filled with water like a sponge, floated to the top of the bowl, stayed firmly together and refused to go down the chute. After trying several times, with the cake getting ever larger, I fished it out with my hand, put it in a plastic bag, and hid it in the trash basket under some crumpled paper towels. The rest I took back to the kitchen with thanks to the chef.

So much for plans.  This is shaping up to be a one-of-a-kind kind of birthday.