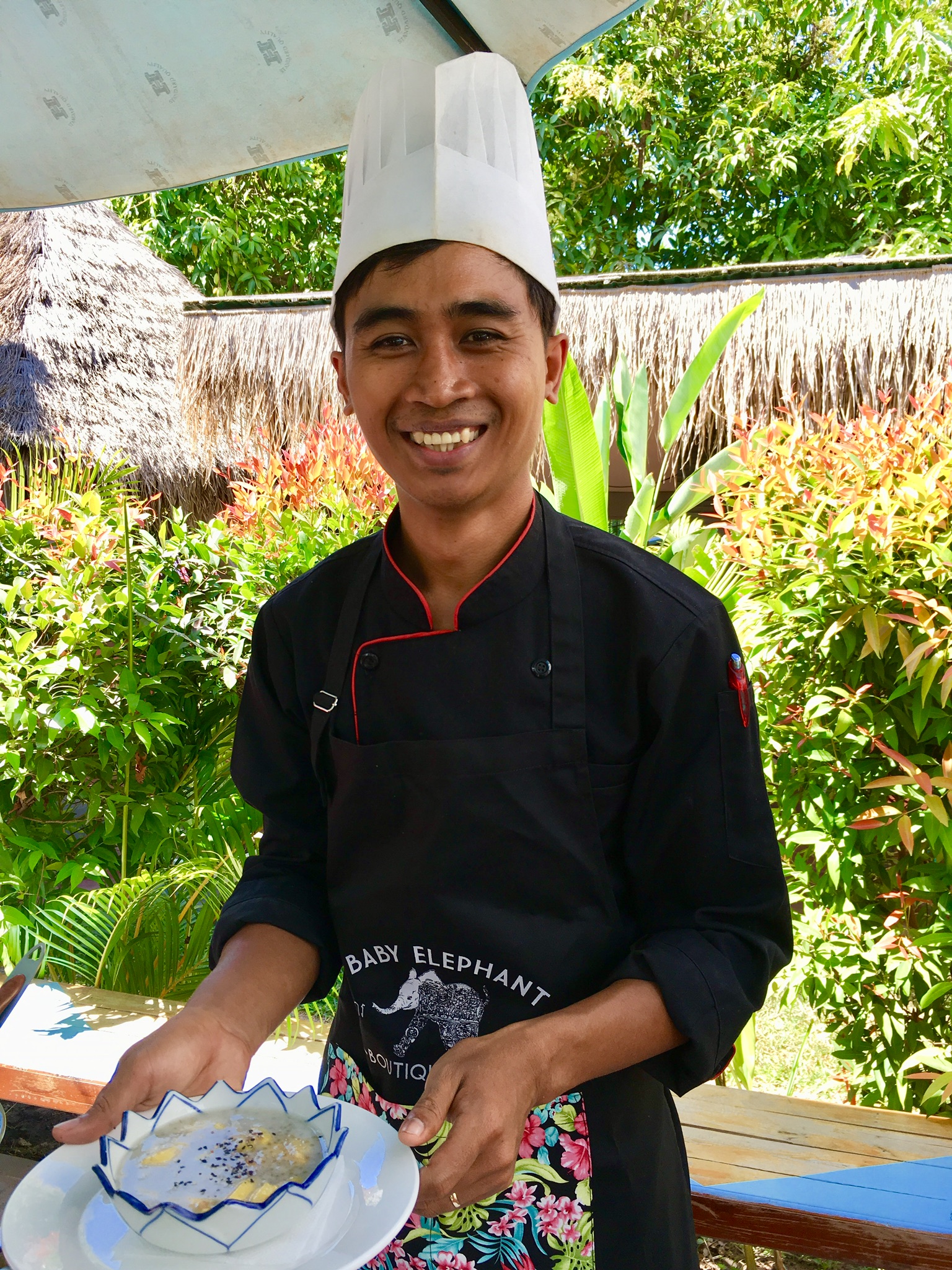 Cooking with the young chef

Typhoon Tembin pounded the Phillipines this week and is headed for south Vietnam. I am too.  Boats and oil rigs have battened down their hatches and there are evacuations pending. Here, the blue skies and hot weather have changed to cooler temps, gray skies and occasional light rain. If the weather doesn’t change it’s plans, I’ll change mine.

Both Christmas and my 75th birthday are officially over, but I’m still basking in the glow. Spending my gift money wisely, I treated myself to two 60 minute Khmer massages ($15. each), one facial ($20.), a cooking class ($25.) and a tuk-tuk ride to Angkor Wat for the sunrise and “small tour” of the ruins ($22. plus tip) – all at the hotel and their Lemon Grass Garden spa – or booked through them.

I had no idea what a Khmer massage would be like and didn’t know what to think when the therapist handed me a freshly laundered pair of cotton Cambodian pjs and pointed me towards the changing room. The treatment room was quiet and peaceful with soft spa music playing. Big pots of white orchids stood under the windows. The table was high and wide and gently firm. After I was settled face down on the table, the petite Khmer woman hopped up beside me, straddled my legs and, using her body weight and hands began pressing me firmly into the table, and, moving around me, pummeled, rubbed and kneaded my body,  using knuckles, incredibly strong fingers, elbows, forearms and, occasionally feet to work me over.  Occasionally she would ask, “Hurt?” “No.”  “You OK?” and I definitely was. In fact, this was one of the best massages I’ve ever had. By the end of the hour my sore, achey, travel weary body was singing from head to toe. If I could have purred I would have. Instead, I tipped her the lavish sum of $1. and thanked her profusely. In Cambodia  I’m  a player. We exchanged huge smiles and sampeahs: the Cambodian form of a  greeting or goodbye and a gesture of respect or appreciation. In a sampeah the hands are placed palms together (like a lotus flower) and held  with fingertips just below the chin, while slightly bowing the head. For me, they raise the fingertips to the mouth giving me the respect my advanced age deserves. Most of the time I am addressed as “Ma-dame” – occasionally as “Auntie.” The higher the hands, the greater the homage. For parents and teachers the hands are raised to the nose and for monks and kings the fingertips are raised to the forehead and the bow is deeper. It is a mark of disrespect to not return a sampeah, and it’s a beautiful thing.

The next morning hotel Chef Hoy Ha and his young assistant took us (two college age American girls and me) to the outdoor market to shop for ingredients for our lunch. Live fish were literally jumping off the counters into the aisles, jumbo prawns were heaped in glistening piles, fruits, vegetables, herbs, nuts, spices and curry pastes were attractively displayed in riotus abundance. Back at the hotel we first made fresh spring rolls in rice paper with prawns and mint and bean sprouts and a spicy dipping sauce, then we were coached in how to make “boats” out of banana leaves for fish Amok – and cook it. We stir-fried chicken and vegetables for a yellow curry and cooked a delicious dessert using tiny sweet bananas, mangoes, “yellow beans” and a tapioca-like ingredient called sago which I learned is a starch extracted from the spongy center of tropical palm stems. While we were cooking, Chef Ha was teaching us about Cambodian ingredients and cuisine in a way that clearly showed his love and knowledge of his national dishes. We were served our lunch in the shade of a thatched pavillion, finishing just in time for me to go to my facial appointment.

Later, I got hold of an old acquaintance, Joe Brown. We arranged to meet in front of the Lucky Mall on Sivutha St. to have dinner at Kuelen, a Korean/Chinese restaurant and watch a performance of Apsara (heavenly nymphs) dancing.

I had met Joe one time: at the Pentagon Peace March in the fall of 1967 when 100,000 of us “peaceniks” marched against the Vietnam war, chanting “Hey, hey LBJ, how many kids did you kill today?” Holding hands and circling the pentagon we concentrated as one and tried to levitate the building with the force of our minds. Needless to say, the pentagon still stands and the war went on until 1975 – but it did help focus the nation’s attention on a war that defoliated and devistated South East Asia, killing well over a million Vietnamese and more than 58,000 American troops in the longest and most controversial war in US history. The after effects are visible every day here in Cambodia in the multitude of amputees – both children and adults – who have been maimed by the landmines left behind by the US and others during the decades of war. The Cambodian Mine Action Centre estimates that there may be as many as 4-6 million mines and other pieces of unexploded orndnance in Cambodia. Tourists are warned not to stray off the beaten path. Outside of Ta Prohm, one of the Buddhist temples at Angkor Wat (most famous these days for being the site of scenes with Angelina Jolie as Lara Croft in the film Tomb Rader) there was a musical group stationed on the path on the way in with all of the musicians having the distinction of being amputees. Cymbals were played by handless men with the cymbals strapped to their wrists, wind instruments by the legless, etc.

Joe Brown is a New Yorker expat living on a fixed income and teaching English to Cambodian children here in Siem Reap.  He was accompanied by his Cambodian wife (whose name I’m sorry to say I can’t pronounce or spell). She is warm and lovely (we walked the streets with arms around each others waists), speaks little English, he speaks little Khmer, but they communicate well nonetheless. We talked non-stop til late at night while eating a lavish dinner, watching the beautiful Apsara dancers, pub crawling and, eventually, singing Christmas carols in the Vagabond bar behind Pub Street with an amazingly good American Santa guitar player and vocalist.  Surrounded by expats from all over the globe, all conversing animatedly, all feeling the Christmas spirit, all enjoying the music and the good Cambodian beer and the company of like spirits – and then bouncing back to the Baby Elephant in a tuk tuk through cool late night streets smelling of charcoal and smoked fish and flowering trees, I felt full of peace and goodwill towards men – and lucky to be here.

Christmas morning at 5:00AM I met Mr. Mab, my tuk tuk driver, in the loby of the hotel. In the dark we motored through the quiet streets to watch the sun rise over the largest religious monument in the world. Mr. Mab let me off outside Angkor Wat telling me to stay, “one hour, two hours, three hours.” He would meet me. But where and when, exactly? This didn’t seem like a workable plan to me since hundreds of people were converging on the same place, but he assured me it would be fine. I went with the flow, crossed the moat – which would hold a dozen Rio Grandes – and stumbled along in the dark towards the grand temple, using my cell phone flash light for guidance. Finding a good perch to sit on, I waited for dawn. Gradually the sky lightened. The sunrise was underwhelming this Christmas day due to cloud cover but Angkor Wat itself was simply hair raising dazzling. I did find Mr. Mab after all and he drove me to Angkor Thom and Bayon and Ta Prohm and waited for me while I climbed and explored and meandered and wondered and took photos.

Back at the hotel the sun was hot and the pool beckoned. I answered. Dinner with a new friend, Ann from Queensland, Australia, downtown, followed by just one more Khmer massage, sent me sliding blissfully into dreamland.