Craving warm weather to burn out the remnants of head and chest cold, I flew from Luang Prabang to Chiang Mai.

Back in Thailand after eight weeks of traveling in Cambodia, Vietnam and Laos, I felt as though I’d come out of an alternate universe and  back into the 21st century. Accorrding to the Bloomberg Misery Index which computes inflation and unemployment numbers, Thailand is “the least miserable country on earth.” Chiang Mai, “The Rose of the North,” is laid-back, easy, modern and clean. The Old City tourist district is encircled by a pretty fountain-filled moat and remnants of ancient, rust-red brick walls and packed with shopping, eating and entertainment options and dozens of opulent temples. Outside the Old City, Chiang Mai sprawls in the foothills of the majestic Shan Hills mountains – right now mostly obscured by smoke from burning rice fields. The main streets are wide and remarkably unpotholed,  blaring horns are a rarity rather than the norm. Literally everywhere you look there are streams of songthaews: small, covered long-bed Isuzu trucks with bench seats in the back. Red ones are for inner city while yellow, blue and green go to various outlying areas. Prices are agreed upon up front and are a bargain. The songthaews stop often to let passengers on or off but are a great way to get around. Tuk-tuks are also readily available at a slightly higher price.  Taxi cabs of the normal variety don’t seem to exist. The streets are calm enough and flat enough that renting motorbikes or bicycles is a viable option,  used by many. The weather this week is warm and dry and tourists in short shorts and halter tops peddle bikes or ride motorbikes comfortably along the wide streets. 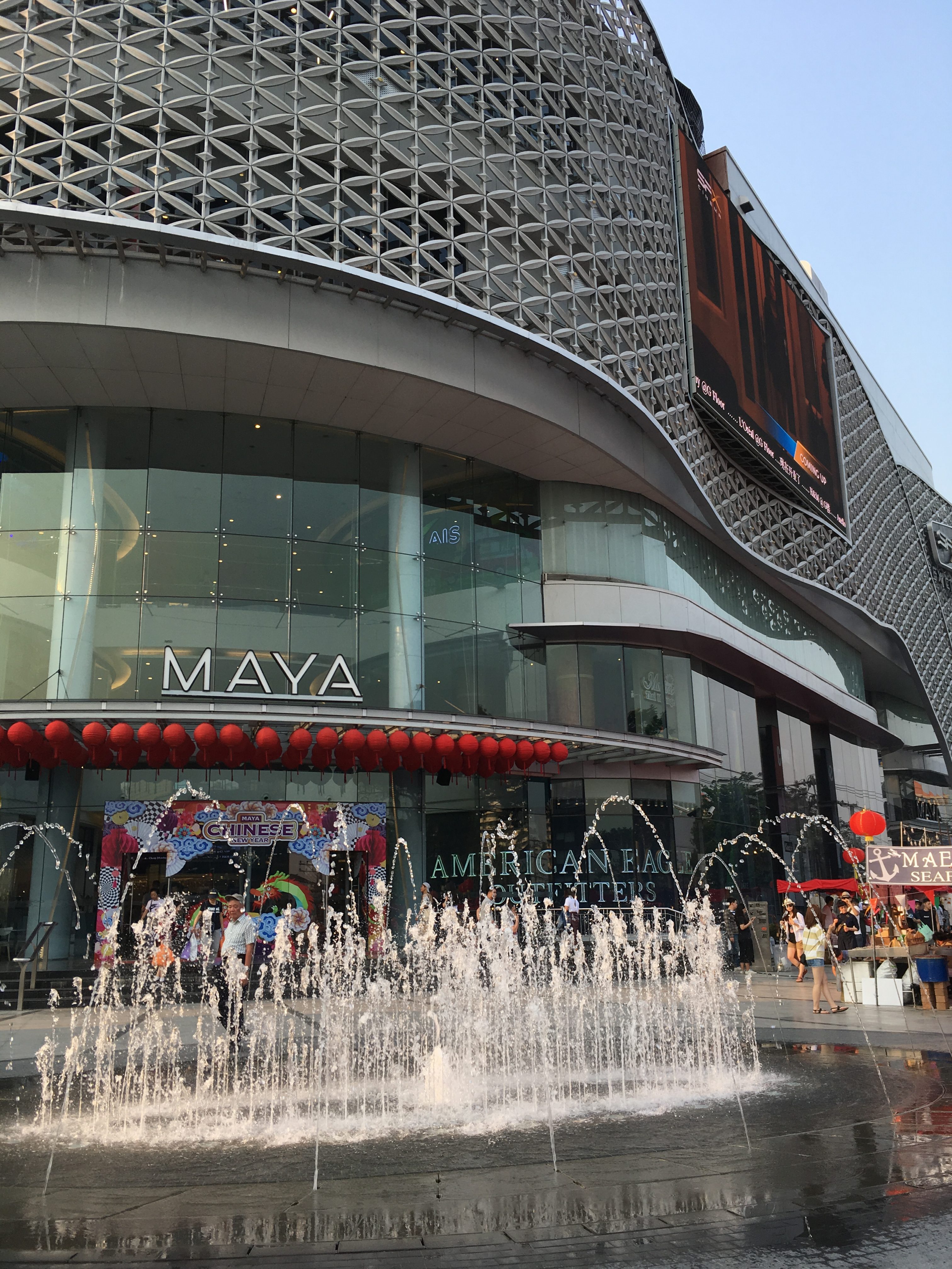 Sidewalks, for pedestrian use (!), observed cross-walks and honest-to-gosh traffic police make walking around safe and simple; tasty food options are everywhere; hundreds of spas offer good quality massages; state-of-the-art hospitals are destinations for medical tourism offering gender reassignment surgery (or Gender Affirmation Surgery for the most up to date PC term), face lifts and other body treatments by highly skilled surgeons. The Maya Mall (or Maya Lifestyle Shopping Center), around the corner from my studio apartment in the cool Nimman district, has five floors of high-end Western, European and Asian stores and two huge food courts with well-priced food available in clean, air-conditioned spaces – a great option if you love street food but worry about sanitation. Botox and stem-cell injections and teeth whitening services are offered on a walk-in basis. The public bathrooms in this up-scale mall have Toto Japanese toilets that can wash and dry one’s nether regions at the push of a button (assuming you knew which button to push), and the state-of-the-art cineplex has first-run American movies in English with Thai subtitles. Missing home and my mother tongue, this was an irresistible draw for me and I went there every other evening I was in Chiang Mai, quickly learning to arrive half an hour after the posted start time to avoid the extra loud commercials. Before each show the giant screen fills with an announcement to stand for the Royal Anthem. Everyone in the theater stands up. The King’s static image is projected on the screen in several splendid poses and outfits with a background of various moving pictures of devoted subjects looking adoring up at him while a stirring Royal Anthem is played. A small price to pay for a Hollywood movie. If you pay top dollar ($12.) as I did for the premier of “Black Panther,” you get a separate theater with a fancy bar, the world’s cushiest adjustable seats – widely spaced and staggered – and a stewardess who brings you a large basket of popcorn, a cold drink and a blanket. As you leave any of the theaters you are saluted with a “wai” – the Thai gesture of respect – a slight bow with palms pressed together in prayer-like fashion. As each person  enters or leaves this huge mall they are saluted by a young, Thai man in uniform wearing white gloves. The daily greeting in Thai sounds like “sawatdee,” and you hear it all the time. In Laos the greeting is a musical “sa bai dee” – with eye contact and smiles. I love this part of the SEA culture and feel happy each time I give or receive such a greeting.

Time is flying by. My return flights are all booked and tomorrow I begin Phase One of the long journey home, with a final ten days in northern Vietnam before my March 1 flight to Hong Kong and next day’s long flight from Hong Kong to LAX and then east to Albuquerque. And Home – to family and friends, green chile and big skies, brown earth (NM experiencing the driest winter in recorded history), cracked lips and broken fingernails, familiar and beloved scenery, favorite people and stories and laughter. My spirits are high but my energy is flagging. Traveling in SEA on one’s own is constant work –  challenging and exhilerating, exciting and exhausting.

Alone again after sister time, in need of comfort and love, I decided to do what many visitors to Thailand do: pay for it. Every day here in Chiang Mai I have treated myself to something luxurious. A veteran of street spas in SEA, I decided I’d had enough of that and found a five-star spa, the Oasis in the Old City, and booked a two hour, hot stone, aroma-therapy massage. They sent a car and uniformed driver to pick me up at the hotel. The car had spa music playing softly and smelled faintly of leather and of flowers. In the gorgeous lobby I was served hot tea and scones and “waied” by beautifully dressed Thai young ladies before being ushered into a private (!), sound-proof suite with all the accoutrements of fine spas. The table was soft, the linens immaculate and smelling of lavender. A fountain trickled the soothing sound of falling water, and the massage was everything I’d hoped it would be. Fresh fruit, a tiny petit-four  and a smooth, silent ride “home” left me floating on air. My last “spa” experience, in Luang Prabang, was with Anne. She opted for a foot massage while I had a manicure/pedicure from a sweet young man who had clearly never done one in his life and kept painting pretty much my whole toe and then taking all the polish off, smiling appologetically and starting over. When the young woman who was in charge of nails finally came back from lunch or wherever she had been, she did the most slap-dash job in the history of the world, barely looking while she snipped and filed – then ran off to check out her cell phone. While I was undergoing this treatment I was watching the young woman who was massaging my sister’s feet and calves. She would work on Anne’s feet with one hand and with the other, smash flies against the window, returning that hand to the job after smearing fly juice off on the glass. Oh yeah! This was not at all typical. While street massages are usually pretty bare bones (“private”means a curtain is drawn between you and the customer next to you) – they are strong and good. But this was the last straw for me. Time to pay more. Other self-indulgent luxuries in Chiang Mai included a swim in the roof-top infinity pool of a boutique hotel followed by Happy Hour cocktails while the sun set over the city; a Japanese dinner of world-class sushi; and the afore mentioned movie premier. All of this plus a week in a high-rise apartment building with modern studio apartment and daily maid service – has put me back on my feet feeling relaxed, happy, and ready for more.

When I am still and I close my eyes, a cinematic montage from the last ten weeks unfurls in my mind. Thousands of images, voices, faces and bodies, moments, places, conversations and points of view, colors and sounds – even smells and tastes – vie for attention behind my eyelids, in my mind. I fall asleep at night into dreams  peopled with a whole new world mixed into the stew of the old. My conscious mind is filled with fresh facts plus a thousand questions I’m eager to research when I actually have a computer, good wifi, and time.  Being more of a sensualist than an intellectual I learn more from seeing, hearing, touching, feeling and tasting a reality, than from sitting in a room reading material disconnected from what I’m experiencing. Now I have a backlog of contextual experiences that open doors to rooms full of subjects I’m eager to learn more about. I’m wide open to filling in the enormous gaps in my knowledge and understanding of these fascinating lands and am frustrated by my inability to speak the languages and really talk to the locals. Time seems to be stretching out and snapping back like a rubber band. One day I race around trying to inhale every  sight, scent and nuance I can before I have to leave; the next day I feel as though I’ve been here forever and will never make it back to the familiar.

With two weeks to go I realize that Chiang Mai has been a great place to reboot, but that I want my last two weeks to be in a grittier part of SEA, but tempered by nicer accommodations. I book a flight back to Hanoi. In the Gem Premier Hotel in the old part of the city – a big step up from my usual digs with a glass-walled shower with rain head, makeup mirror and great reading lights by the duvet-covered, soft bed – the young travel agent for the hotel helps me find just the right trip to northern Vietnam – where I will visit Sapa and the northern hill-tribe villages. He arranges a drive there in a mini-van, a stay in a “fancy” hotel in Sapa, and a private Hmong guide to take me trekking in the mountains and hill-towns with Sunday in the tribal markets and a night train back to Hanoi.

“I’m going to be by myself?” I ask him – since usually you go with a group. “You are old,” he explains in a gentle voice, looking directly into my eyes. “We want to take good care of you. This way you can stop hiking whenever you want to and go back to your hotel for a nap!” Swallowing my pride (“old?!?!”) I think about this, decide it is a good idea and sign on. 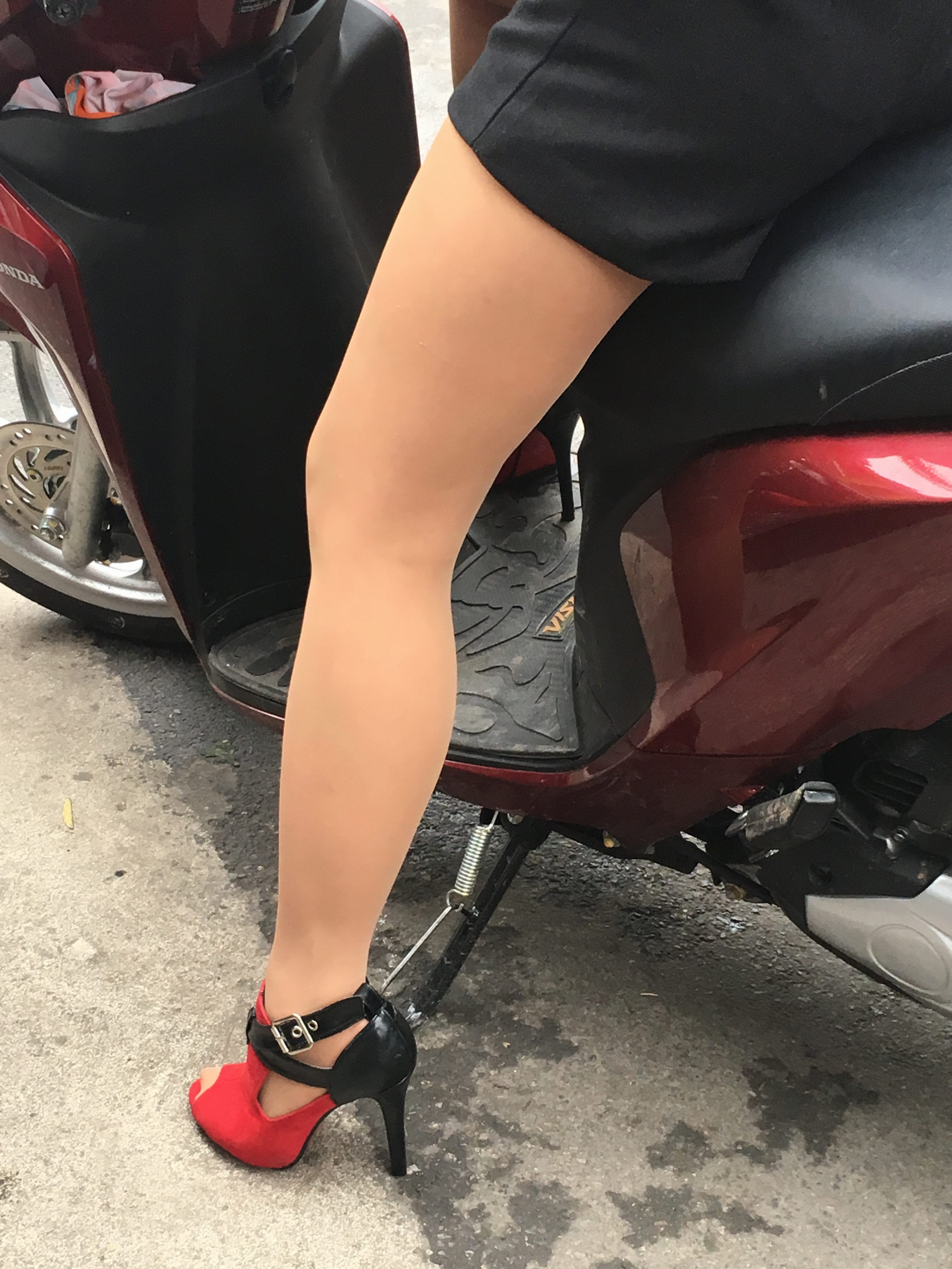 One Reply to “Chilling in Chiang Mai”